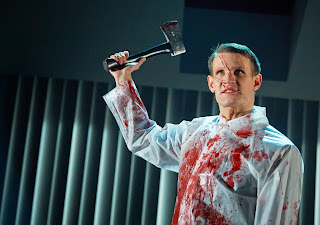 The Almeida Theatre now have an ipad app called "Almeida Theatre Publications".  The initial app is free and once you've downloaded and opened it, you're given the opportunity to purchase - for £1.49 - the American Psycho "publication".

This consists of what appears to be the theatre programme itself (I obviously haven't seen the programme) with the tracklist - plus two playable tracks:  "You Are What You Wear" (no Matt singing but you do get to hear him talk) and "Mistletoe Alert (again, no Matt).  It also has an essay about Patrick Bateman by Mary Harron, a "catch up" with Bret Easton Ellis and a lovely interactive map of New York which enables you to click on various places for more info such as "The Four Seasons" which comes up with "Well, I do have an early lunch with Cliff Huxtable at the Four Seasons" etc. 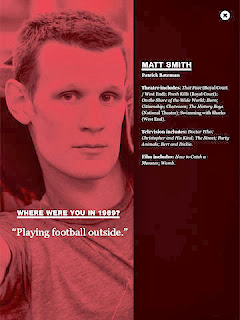 Other features of the app include an article by music journalist Paul Morley about Patrick Bateman and the music of the 80's, the Mr Porter photos, some rehearsal photos and a really terrific article about the "Making of a New Musical" which features quotes from the writer, some early set design concepts, a page of the musical score and a page of the script with handwritten notes on it.  There's a video interview with some of the cast (no Matt), a Spotify mixtape of 80's tunes selected by the cast and brief biographies of cast and crew.

This ipad app is currently only available in the UK and you can download it and get more information here:

Alternatively, of course, you can simply search in the ipad app store for "Almeida Theatre Publications".

Posted by drfrankentweed at Tuesday, December 24, 2013 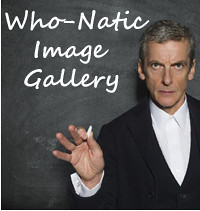 Other Sites to Visit